20 Best Songs About Not Giving Up and Overcoming Adversity 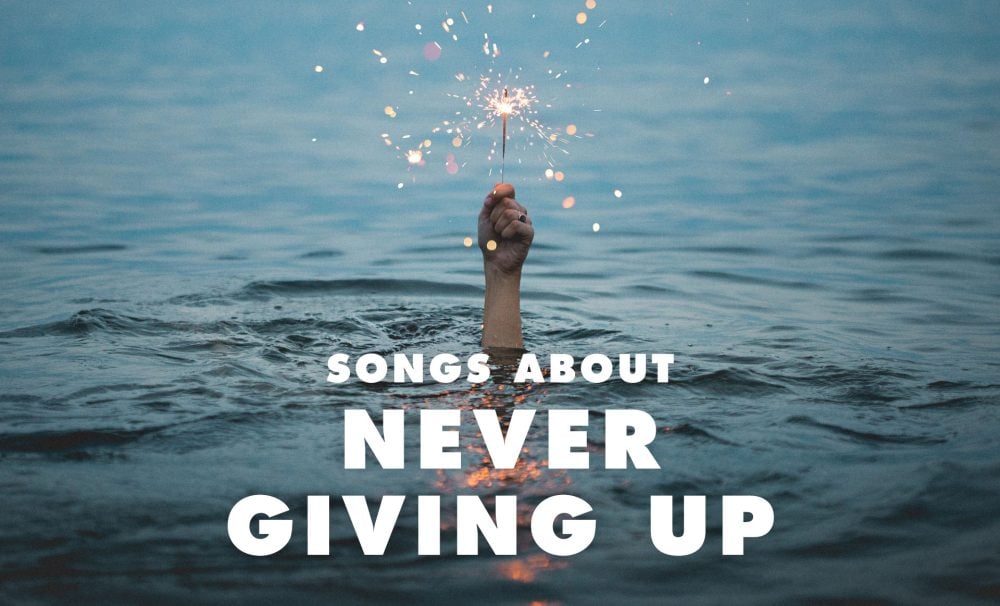 It’s easy to feel discouraged and want to give up. Whether it’s stress from work, heartache from a break-up, general depression, or a major disappointment — there’s a lot of reasons people feel down.

The quickest and easiest way to give yourself a boost is a song about overcoming all obstacles. In three minutes you can go from wanting to give up to feeling like a champion. Here are our top picks for songs about not giving up, no matter what.

No list of songs about not giving up would be complete without this classic 1981 hit. In fact, one New York hospital is even using the song to celebrate the release of COVID-19 patients from their care.

2. Eye of the Tiger by Survivor

The fifth single from the rock band Survivor is sure to inspire anyone to keep going even when they feel like giving up.

The temptation to leap up from your feet and move your body to Eye of the Tiger‘s unforgettable beat is nigh impossible to resist, and its supportive lyrics only encourage you to keep at no matter who may be watching you rock out.

3. The Climb by Miley Cyrus

Despite being written for the 2009 film Hannah Montana: The Movie, The Climb is among Miley Cyrus’ earliest efforts to break away from the tween music industry and follow in her father Billy Ray Cyrus’ footsteps as a country music artist.

The song is a power ballad that pays homage to the enduring adage “life is a journey, not a destination.”

Survivor is the third studio album from the defunct R&B group Destiny’s Child. Written and composed by Beyoncé Knowles, Anthony Dent, and Matthew Knowles, the song is about finding the strength to overcome the negativity in your life and cut ties with the people who put you down no matter what anyone says.

5. I’m a Believer by The Monkees

I’m a Believer is most well-known today because of the Smash Mouth cover from 2001 computer-animated film Shrek. However, the song was actually written by Neil Diamond and recorded by The Monkees in 1966. Diamond’s lyrics describe a man who had all but given up on love until he meets a woman that convinces him to change his mind.

The story behind The Monkees is as much about not giving up as the song’s lyrics themselves. It all began with television producers Bob Rafelson and Bert Schneider, who wanted to develop a television series about a fictional rock band.

They cast four actors/musicians who had varied experience with music. The group’s perceived lack of talent led the producers to insist that the band’s instruments be unplugged on set. However, these actions only encouraged the band to start writing their own songs until the producers finally relented. And though I’m a Believer isn’t one of them, it’s still a powerful anthem for a fictional band that ultimately became a real band.

6. I Made It (Cash Money Heroes) by Kevin Rudolf

I Made It (Cash Money Heroes) is the third single from Kevin Rudolf. The New York-born rock artist started his career in 2001 with the album Binocular. However, despite two songs from the album being used in TV shows and movies, it largely escaped the American public’s attention.

It took Rudolf seven more years to release an album that got US-based music lovers talking. Titled In the City, the album’s second track, Let It Rock, reached number 5 on the U.S. Billboard Hot 100 at its peak.

Two years after the debut of In the City, Rudolf released the single I Made It (Cash Money Heroes) to reflect on his success. Featuring Cash Money artists Birdman, Jay Sean, and Lil Wayne, the song describes the merits of never giving up on your dreams.

7. Go the Distance by Roger Bart

So many Disney films are about an underdog overcoming impossible odds that including Disney songs on this list almost feels like cheating. But songs like Go the Distance from the 1997 animated film Hercules have become timeless classics for a reason.

Composed by Alan Menken and written by David Zippel, the song debuts in the film when the teenage Hercules begins to question his place in his village. His superhuman strength has long made him an outcast, but his accidental destruction of the town is the last straw for the villagers.

They demand that Hercules isolate himself from “normal people” like themselves. Hercules complies and sets off to find the place where he belongs. Along the way, he monologues to himself about how nothing will stop him from getting there.

8. I Am Moana (Song of the Ancestors) by Auli’i Cravalho and Rachel House

Although the animated film Moana is only four years old, its soundtrack quickly attained the same classic status as its more established Disney peers from the 1990s. One of the album’s most notable entries is the song I Am Moana (Song of the Ancestors).

This showstopper occurs at a pivotal time in the film when its titular heroine is ready to pack up her oar and go back home. But suddenly, the spirit of her deceased grandmother appears.

She reminds Moana to focus on her accomplishments instead of her failures, which inspires Moana to pick her oar right back up again and finish what she started rather than give up.

9. Journey to the Past by Liz Callaway

Contrary to popular belief, Don Bluth’s 1997 animated film Anastasia is not a Disney production. However, most of the songs in the film are memorable enough to rival many-a Disney favorite.

One of those songs is Journey to the Past. The song was composed by Stephen Flaherty and written by Lynn Ahrens to be the film’s titular heroine’s “I Want” song. It demonstrates a mix of emotions from nervousness to hope as Anastasia summons the courage to overcome her fears and seek out her mysterious past.

10. When You Believe by Whitney Houston feat. Mariah Carey

Like I Am Moana (Song of the Ancestors), When You Believe launches in the darkest hour of the 1998 animated film The Prince of Egypt. Despite Moses’ warnings and multiple deadly plagues, his adoptive brother Rameses continues to deny the Hebrew people their freedom.

As a result, the people of Egypt are punished with a tenth and final plague. The plague claims the lives of all of Egypt’s first-born children, including Rameses’ son and heir.

In the wake of this irreparable tragedy, Rameses finally agrees to free the Hebrew people from slavery. However, Rameses and the Egyptian people are not the only ones mourning the loss of these innocent lives.

Moses, his wife Tzipporah, his sister Miriam, and the other Hebrews also reflect on the prices that they and others have had to pay to obtain their long-awaited freedom from bondage through the song When You Believe.

Besides the Hebrew people’s sacrifices, the song also explores their hopes for an uncertain future. The same is true of the Whitney Houston (feat. Mariah Carey) cover even in light of its slightly altered lyrics.

Perhaps best known as an anthem for innumerable charitable causes, Rachel Platten’s 2015 hit is a song that’s all about tenacity. With a catchy chorus and a powerful message, the song encourages listeners to not only sing along to the anthem but to take the song’s lyrics to heart when dealing with their own struggles.

The Show Must Go On by Queen

Queen’s song about performing in the face of adversity is one that draws heavily on Freddie Mercury’s own dying days. Recorded shortly before his death, the song is a figurative stand against the dying of the light. Not only does Mercury belt out a performance that goes above and beyond, but the lyrics to the song plainly spell out his own feelings about giving up in the face of the inevitable. Though it might be as bombastic as many of the Queen’s other songs, the amount of heart in this one makes it a true anthem for those going through tough times.

It’s My Life by Bon Jovi

First released in 1983, I’m Still Standing is one of Elton John’s most popular song. A song about making it through all the troubles of life without falling down, it’s a song that not only admits that tough times come but one that revels in the fact that those who make it through the other side come out stronger. Elton’s song is an infectious pop piece that not only does an amazing job of showing off the singer’s abilities, but one that definitely helps others who wonder what comes next after they’ve gone through tough times.

.fun’s 2012 hit is not just a song about getting triumph, but rather one about survival. It takes a look at what it’s like to go through the bad times in life and simply hang on, looking to those things that are the most important for inspiration. Though the lyrics themselves are a little more somber than one might expect for a song that’s all about making it through life’s toughest moments, the end product is one that stands out as particularly true for those who have hit rock bottom.

While many songs about not giving up are all about those who are brought down by major forms of adversity, Katy Perry’s 2013 is an ode for all of those who have sat back and suffered in silence. The powerful song calls for those going through tough times to do more than just survive – it calls on them to speak up and make their needs known to the world. With an infectious chorus and some really lovely lyrics, Roar has gone on to be a staple of soundtracks and sports teams.

David Guetta and Sia’s 2011 dance house anthem is incredibly popular for its beats and for Sia’s vocals, but some of its better qualities can actually be found in the song’s lyrics. A song about standing up to the world no matter what it throws at you, this is the kind of anthem that proves that real power comes from refusing to get knocked down. A huge hit on the House charts, this song has also found its way into a few movies and innumerable trailers since its initial release date.

First heard in the 1992 Disney musical “Newsies”, this song tells the stories of a group of newsboys striking against the giant newspapers who employ and exploit them. This rendition of the song comes from the later stage musical adaptation, and the enhanced version helps to sell the fact that the boys are not only going up against impossible odds, but they’re doing so in a way that makes them winners no matter the outcome. This is an excellent song for anyone who’s trying to bring the fight to something bigger than themselves.

Move Along by All-American Rejects

Not every song about not giving up is about fighting. Some songs are just about having the strength to keep moving no matter what. All-American Rejects’ 2005 pop hit implores the listener to just keep moving forward, as doing so is the real secret to not getting dragged down by life.

Float On by Modest Mouse

Modest Mouse’s anthem is definitely an outlier on this list, but it’s still a song about not giving up. Rather than fight the world, the band implores listeners to just go with the flow – while bad times might be here now, good times might be just around the corner for those who are willing to just keep floating on. 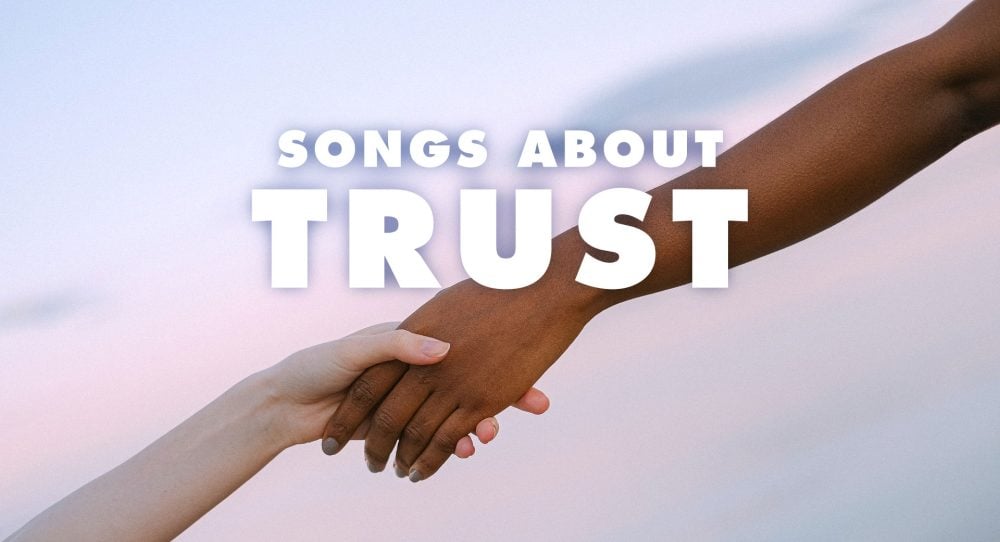 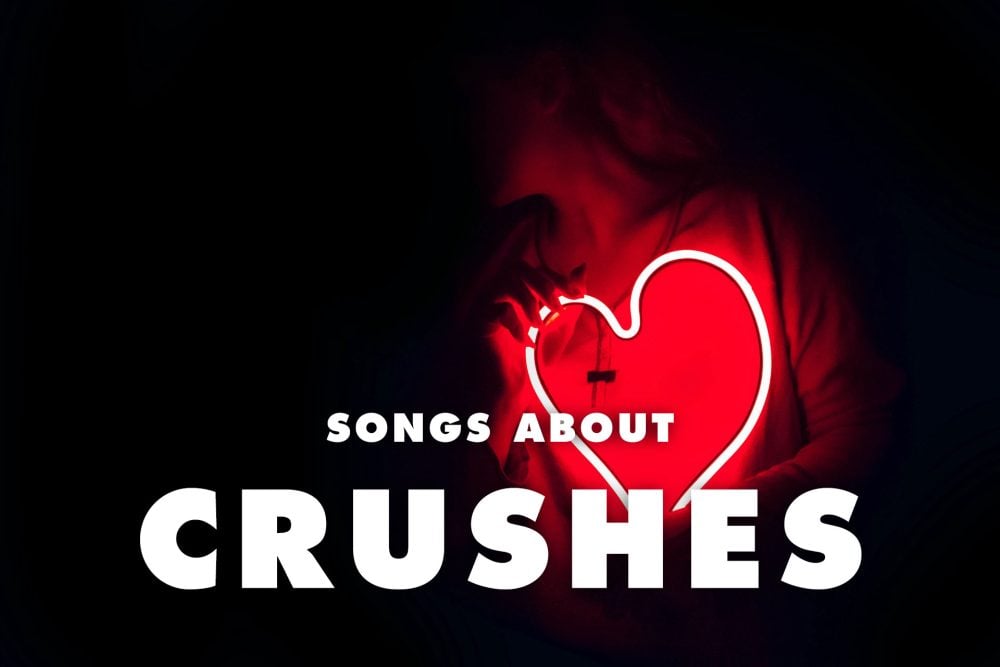 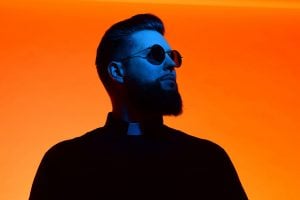